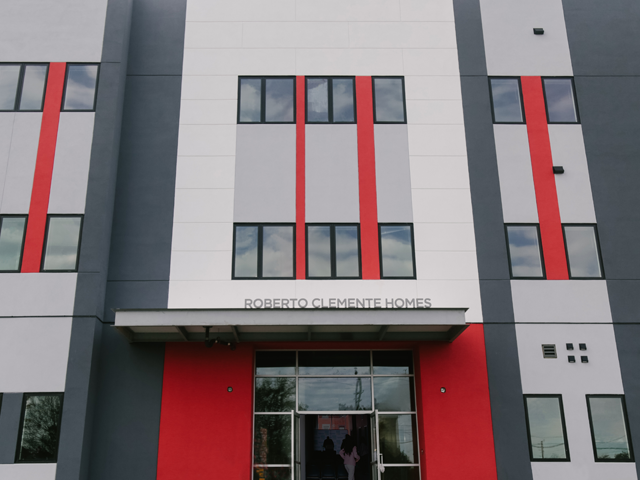 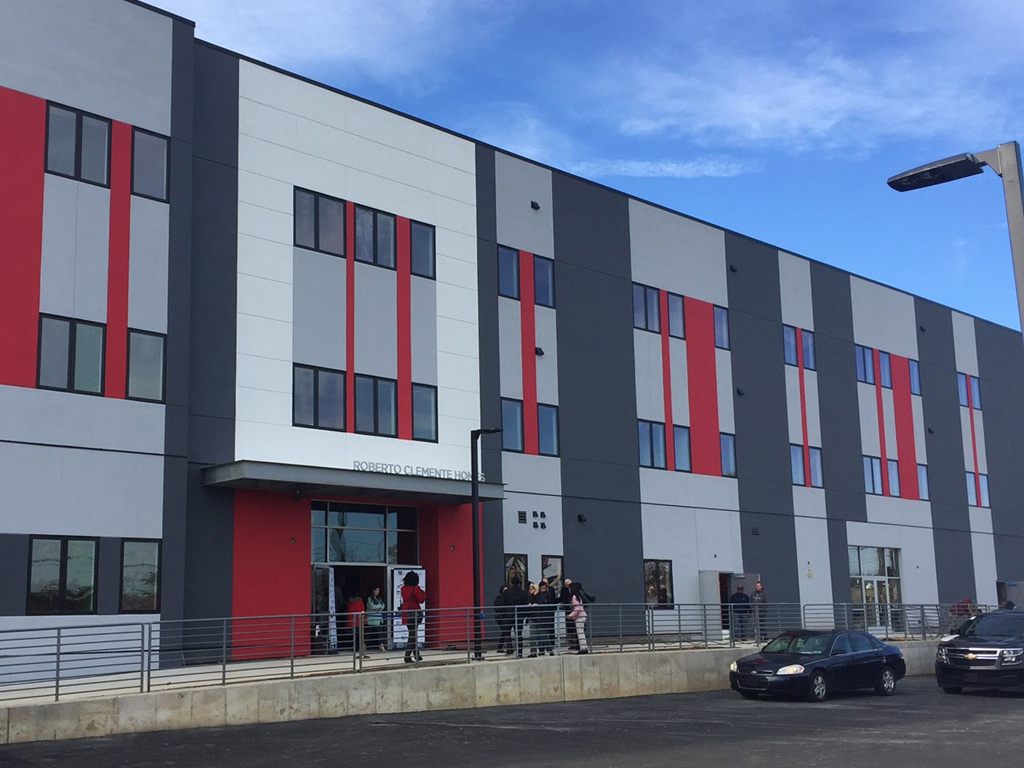 Built in 1924, this building began its life as the seven-story Apex Hosiery Factory. The company found immediate success and soon became the largest non-union pantyhose factory in the city of Philadelphia. Being a non-union company in the hosiery trade at that time was very contentious and the factory was the scene of one of the most famous strikes in United States history; a strike that lasted for more than seven weeks. In the end, the workers prevailed and the shop became unionized, but it was a move that eventually led to the company’s demise. According to management at the time, high labor and shipping costs resulted in the business being unsustainable, and in 1954, it closed its doors for good.

The School District of Philadelphia purchased the factory in 1967 and renovated the factory floors into classrooms for The Pennsylvania Advancement Middle School. In 1984, the school was renamed The Roberto Clemente Middle School. Throughout much of its existence, the school was in need of upgrades and renovations that were never done, and the reputation of the school worsened along with the conditions inside. There were protests and even near-riots due to the school’s terrible conditions, and in 2007 it closed for good. Once it shut down, the abandoned building fell victim to vandals and crime and became a serious blight on the neighborhood and a safety risk for anyone inside or near it. For many years, the site and the surrounding area were devoid of energy and activity, as the entire block was overrun by crime and drugs.

Working with multiple partners and a creative financing and development plan, Esperanza, a local non-profit organization in Hunting Park, was able to acquire the building in 2016. The building had been targeted in 2012 in the Hunting Park Neighborhood Strategic Plan as a key component necessary towards furthering the revitalization of the neighborhood, and the collaboration between Esperanza, PZS Architects, the Philadelphia Housing Authority, the city of Philadelphia’s Office of Homeless Services, and other partners provided the impetus and financing necessary to get the revitalization project underway. Esperanza partnered with PZS Architects who were able to reimagine the building and transform it into an affordable housing complex, something which was desperately needed in this community. Now open, the building provides a great benefit to the community and is reinvigorating an area that had long been in decline as a result of the massive eyesore that had occupied such a prominent location in the neighborhood for so long.

Transforming this crumbling, dangerous, oversized, abandoned factory-turned middle school into a housing complex more in scale with the surrounding neighborhood was a challenge. The new design by PZS took the original seven-story building down to three stories, which involved removing the top four floors of the existing building through a demolition process that was carefully planned and executed without causing structural damage to the three remaining floors underneath. In addition, an extension off the back of the building which formed the original structure into an L shape was also removed to achieve the desired square footage and to allow for a playground and parking lot on site.

The colorful and thoughtful design of the three-story mixed-use building that now occupies this site makes it a true landmark in this neighborhood. With 38 2-bedroom and 3-bedroom units and 5,000 sf of commercial space on the ground floor, this building is already functioning as a catalyst for change and progress in a once-declining neighborhood. There is activity on the street from the influx of new tenants, and the building is contemporary, clean, and more in scale with the rest of the structures that surround it. Once a dilapidated and dangerous eyesore, this building now serves as a successful example of an ambitious vision becoming a reality through hard work and cooperation.

More From The Blog

PZS and The AIA 2030 Commitment